No seasoned driver likes to think about such grim statistics, but the reality is that too many people die or are injured on U.S. roads every day. According to the latest official data, some 50,000 people lose their lives in car crashes on the highways and freeways of the United States each year. And a staggering 22 million (the population of a medium-sized European country!) are injured. That’s why more and more professional organization, government institutions and passionate drivers alike have been advocating the value of defensive driving. It’s probably the only large scale solution to these issues – so if you want to contribute to making America’s roads safer, read on!

Once you’re done reading, check out what else you can do. Send your kids to defensive driving classes. Sign up for a Texas online defensive driving course. The Lone Star State has got one of the strictest policies on moving violations, so you can be sure you’ll be learning all the right things to stay safe on the road. Last, but not least, feel free to share your own tips and advice with our readership, in the comment section.

If you’ve taken so much as a single driving lesson in your life, then you know all cars have blind spots – and even motorcycles do, too. In fact, the situation tends to be even more complicated for bikers, since some of them can only turn around so much, to see what’s coming up behind them. Be mindful of the other drivers’ blind spot and don’t switch lanes without making sure they can see you. If you’re not aware of your car’s blind spots, then check to see if your rearview mirrors are correctly adjusted, first of all. Then see if you can notice anything near the rear of the car. For other vehicles, the blind spot is directly in the rear, while tall vehicles usually come with blind spots in the forward quarter. Blind spots on trucks are, in direct proportion with their size, far larger. Even parked cars have areas in which the driver can’t notice anything, as they back out and pull away.

2. Make clever use of your headlights

According to statistics, we drive at night for roughly one quarter of all the time we spend on the road. The same figures say that a chilling 50 per cent of all accidents take place at night. To lower the 25,000 death toll from nighttime accidents, you need to make sure you’re using your headlights correctly. Here are the basic situations in which making use of the car’s lights is absolutely mandatory:

–          At sunrise/sunset. Visibility is poor and other drivers may have a hard time seeing you approach if your lights are off.

–          At dusk. Dusk is also known as blue hour, because that’s the tint of the light at the time of day. Check and double check for cars, pets, bikes, pedestrians, and kids on the road.

–          In poor weather conditions. Heavy rain and snowfall act as reflecting surfaces for the light, which means they can effectively blind drivers. Don’t use your fog lights, but opt for the low beam headlights instead.

–          In fog and dust. Typical headlights won’t work as well in these conditions, since such phenomena can reflect the light right back at you. Instead, low-mounted fog lights, which are situated below the other drivers’ line of sight, can prove very helpful.

The one situation in which it’s best to simply turn off all your lights and move away from the road is that in which the visibility is too poor for you to see anything or drive at all. It may sound somewhat counterintuitive, but your best bet in such a scenario is to move out of the way and turn off all your lights, including parking lights, marker lights, brake lights, flashers – everything. The airborne particles in very poor visibility situations reflect the light and might lead other drivers to believe that you’re still on the road, because they do not accurately perceive depth. Simply make sure you are completely out of the way and stay there. According to investigations of chain pile-ups, invisibility is the better option in such scenarios. 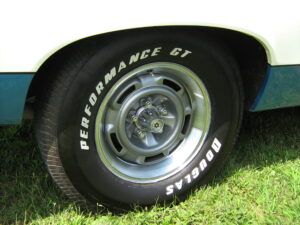 3. Keep your tires in mint condition

It pays to maintain your tires in more than one way. For one thing, making sure your car is in perfect driving condition is always the safer alternative. For another, it will save you any potential expense caused by an accident. One way to test your tires at home, before a trip, is to insert a penny into the tread of any tire. If the top of Abraham Lincoln’s head vanishes inside the tire, then you’re good to go; if not, consider changing your tires as soon as possible. A worn out tire is more likely to go flat than a new one, you know? To boot, newer tires come with wear-out marks which will help you figure out if the time has come to invest in a new set. Another important thing is to make sure your tires are correctly inflated. Always have the pressure set at the level specified by the producer – NOT the maximum level, nor 10 per cent lower. Poorly inflated tires will last you about one third of the time less than their typical lifespan!