Coming in at number 60, in the U.S. News ranking of American universities, the University of Georgia (known in short as UGA) has a rather longstanding tradition of academic excellence. The century-old school was founded in 1785 and over the 2013-2014 academic year it enrolled over 26,000 students – of which 57 per cent were female. If you’re interested in applying, here are a few fun general facts: 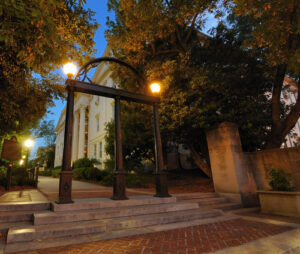 But what if room and board, as well as campus life, are of no interest to you? What if you’ve long since passed the age of partying hard with your fraternity bros? Well, in such cases, UGA might actually be one of the best choices for you as a graduate student. The public school has been offering online training via graduate programs since the 2001-2002 academic year. In 2013-2014 it enrolled 54 students, all of whom were employed at the time of enrolling.  Need more facts, before you decide if UGA online courses are the way to go, as far as your continued learning is concerned? Read on, because we’ve got all the essentials covered.

Cost and other administrative matters

In the 2013-2014 academic year, an online credit for both in-state and out-of-state students at UGA cost $595. U.S. candidates were allowed to apply by July 1, while the deadline for international students was April 15. The school provides a comprehensive FAQ for prospective students at this link. You can also reach out to them via email (gradoff@uga.edu) or phone ((706)542-1739). The director of admissions for the current academic year is Ms. Cheri Bliss.

So far, so good: the UGA offer for online courses seems accessible and fairly priced, but what about its actual quality? According to U.S. News, the online graduate program offering at the school ranked 22nd out of all the online programs available in the states. The school scored in the average to higher echelon, when ranked for student engagement, the level of training and credentials of its staff, as well as the quality of services and technologies it places at the disposal of its student. The student engagement score stood at 63 out of 100, the school ranked 91st in terms of faculty engagement, and the student services and technology score, as assessed by U.S. News, was 50. Bear in mind that the school is highly selective, when it comes to admissions to its online graduate programs, ranking 2nd out of all schools, with a selectivity score of 87.

There are no part-time graduate online courses available at UGA, but those interested in full-time programs have no fewer than 16 at their disposal. The school also has 14 tenured or tenure-tracked faculty members. The school offers four Master’s degrees in education, with the following titles: Adult Education, Educational Psychology & Gifted Education, Reading Education, and Workforce Education. They’re all taught by full-time faculty members at the school and offer different approaches to the educational process, from literacy education, to creativity and equity in gifted education. All the programs are accredited by the NCATE and, as expected, the most sought-after concentration is Teacher Education and Professional Development.

The average size of a class is 15 students (with the maximum limit standing at 25). Campus students are allowed to enroll, but there are no in-person attendance requirements for online students. However, the school does encourage collaboration between campus and online students. The vast majority of students are women (81.5 per cent, versus 18.5 per cent males). You can find the school’s online programs on LinkedIn as well as on Facebook and students have an archive of most courses recorded and placed permanently at their disposal.