In 2013, the statistics on motor vehicle accidents and road traffic in Texas showed some improvement – though the figures only got mildly better. According to official data, 3,377 people lost their lives on the road in Texas, fewer by 1.05 per cent compared to the previous year. The number of vehicle miles traveled in Texas also got better: it increased by 1.10 per cent, to 240,447; the car crashes that occurred in the state cost an estimated total of $25.7 billion, lower by $300 million than in 2012. So, by and large, one could say the situation has improved – yet authorities and officials in the traffic safety industry say the state’s motorists still require more opportunities for instruction in defensive driving. Those for whom time is an issue can always sign on for a Texas defensive driving course online. Online training is just as dependable as taking a real-life course these days, if you know where to sign up. But before you do, check out the 5 safe driving tips below, to get an inkling of what you can expect from such a course.

Tip #1: Safety devices are your friends

Seat belts are essential, but they’re often not sufficient to ensure safety on the road. If you’re driving with kids, it’s strongly recommended to purchase an age appropriate child seat, with its respective safety restraints. ABS brakes also provide more security than regular ones and, when used properly, air bags can also save lives. Bear in mind that all children aged five and under should be driven around in child safety seats, all buckled up and restrained. Even if your child seems big enough to use regular seatbelts, if they’re five years-old or younger, you’re better off plopping them into a special seat for infants and kids. And, of course, never, under any circumstances, should you place a child safety seat in front – in the event of an airbag deployment, the child risks serious injuries and even death. 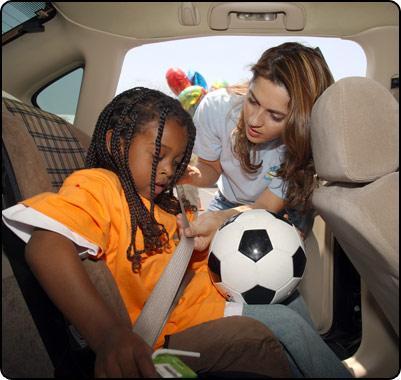 Always buckle up your kids

If you decide to enroll in a Texas defensive driving course online, practicing your driving will be up to you. And a major part of driving safely lies in your attitude. If you’ve been driving for some time now, chances are you already know the rules (all, or at most of them). Sure, you might need a primer every now and then, but the point is that you’ve got the know-how, you can hone the skills, and learning how to drive defensively will all be a matter of practice. It’s important to practice with self-confidence, a relaxed attitude, and the confidence you can do this.

Does this sound a bit counter-intuitive? After all, if a car has stopped on the road, this means it can’t hit you, or anyone else for that matter, right? True. However, it also means that you run the risk of inadvertently causing damage to either the car or to its passengers. The rule of thumb, whenever you pass a slow moving or stopped vehicle, is to ask yourself ‘why?’. What’s it doing there? Chances are the passengers have gotten off the car to deal with some trouble, case in which they might be under the car, with their legs sticking out in the road, or they might even emerge in front of you out of the blue. Be prepared!

An informal poll among drivers would most certainly include drivers who don’t signal (or, worse, who signal one way, then turn the other) at the top of the list of pet peeves. Don’t be that guy. Also, if you’re driving a vehicle without a self-canceling signal, such as a motorcycle or truck, don’t remain oblivious to this. Make sure your signal lights are turned off and always check to see that you’re sending the right signal. Yes, even if there’s no one else on the road on a radius of 50 miles and it’s 3 AM in the morning. Better to be safe than sorry – and that’s what defensive driving is all about, in fact.

What’s the first thing that comes to mind, when you hear the phrase ‘driving impaired’? If you’re think about driving under the influence you’re right, but only in part. Anything that diminishes your ability to drive, such as a broken limb, an illness (no matter how minor), and even extreme fatigue can cause impairment. And, as it follows logically from the above, all these are instances in which you shouldn’t drive. Bear in mind that the law takes impairments very seriously. For instance, did you know that in some states it’s illegal to drive without glasses, if you suffer from impaired vision? The same goes for hearing and hearing aids. Last, but certainly not least, always check out the usage leaflet of any medication you might be taking. Some of them impair your capacity to drive, which means there’s no safe driving while following that treatment.