Over the past decade or so, e-learning has transformed from the buzzword of the hour into a sweeping trend, that’s eventually come to permeate mainstream corporate culture. Nowadays, organizations from all over the world integrate online training into their benefits packages, while individual learners are also quick to adopt it – either for personal or for professional reasons. If you’re interested in online learning, either as a human resources manager or simply as a person looking to broaden their skill set, you may be wondering what the best educational model is for your needs.

At the moment, the battle, as it were, seems to be waged between live training with a tutor and taking a self paced online course. While both are equally viable options, self-paced learning might be the better choice for people who see themselves as independent and generally prefer discovering new things on their own. However, there’s a right and a wrong way to learning independently, which is why, in the following, we’re offering you our top six tricks to becoming a better self-paced e-learner.

1. Know your own pace 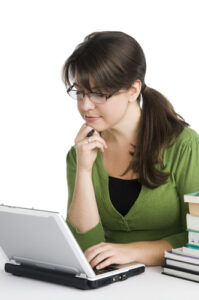 Some people can learn new information that they find particularly relevant in just one go: they only need to take one look at the new material and it sticks. Others, on the other hand, require repetitions and drilling before they feel they’ve mastered the content. There’s no better approach, when it comes to the pace of self-paced learning. The only thing that does make a difference is to know where you’re positioned, in the tug between these two pacing extremes.

This one targets human resources experts, who often have to struggle with logistics problems, especially when scheduling courses that end up with massive attendance. The best way to handle such a situation, in fact, is to set a deadline for a self-paced online course and then make sure everyone’s completed within the given timeframe. Run periodic reports, to keep up with your attendants’ progress – and you’re all set!

Just like with pacing, interaction with one’s peers is an educational factor to which people’s responses can widely vary. Some learners prefer to allow new concepts to sink in as they explore them on their own, while others only truly grasp them after interaction with a peer, an educator, or an enabler of the learning process. One way to address this issue in the self-paced learning process is to take more of a mixed approach, which combines both live on-to-one online training sessions with completely independent coursework on one’s own.

Basic introductory courses, regular training sessions, and other types of educational content that has a perennial value is perfectly suited for the self-paced learning approach. This, of course, from the perspective of the course manager or designer. You see, if you’re going to be delivering the same information, with little to no change in time, on a regular basis, you’re likely to run into a lot of trouble trying to organize individual training sessions for each participant. As such, it’s probably best to develop a library of permanent resources, which self-paced e-learners have access to at all times and which they can go through as quickly or slowly as they prefer.

A 1998 study on the effectiveness of self-paced learning revealed that the most successful such learners performed well in standardized tests if and when they had been allowed a large degree of control. In other words, students who were allowed to choose what to re-study fared better than those who had been put through a guided process. The importance of self-regulation in
self-paced learning is, intuitively enough, essential. In order to efficiently study on one’s own, one needs to feel they have all the control, in terms of choosing what, how, when, and for how long to study. This fact can also be chalked up to the natural differences in terms of learning styles and preferences between individual learners.

There’s one conclusion that can be gleaned from all of the above, when it comes to rendering self-regulated learning more efficient – for both the learner, as well as for the facilitator. To each one’s own, but the process goes far better when the learner goes into it with a strategy. An important aspect to developing an effective self-paced learning strategy has to do with the perceived degree of difficulty of the items being studied. Learners naturally tend to allot more time to the items they find more difficult. Although this gap holds especially true for young learners and tends to decrease with age, it still applies to mature self-paced students. Similarly, learners have different ways of deciding when they’ve studied an item for long enough; several approaches have been proven similarly efficient. What’s important is that the learner is aware of their own criteria for study completion – and that she applies said criteria to each item being studied.