Anyone who’s ever taken math in school, irrespective of age and level, knows that feeling tinged with fear, laced with nervousness, and usually accompanied by clammy hands, which occurs before a math test. Math anxiety may sound like a joke, but it’s actually a real problem, that can come to impact one’s academic career, if left unaddressed. That’s the bad news. The good news is there’s plenty of new research out there on the way the human brain deals with math and its collateral effects. To boot, the existence of online college math courses can help you deal with any weaknesses in your knowledge of math. If you want to improve your level of math, perhaps even get credit for college, or simply foster a better relationship with math in general, online training is definitely a palliative to consider. And, while you’re at it, read on to find out what neuroscientists have been discovering about our brains on math.

Math anxiety and how to overcome it

A new study, recently reported on by the academic portal Science Daily, looked at the link between math anxiety and cerebral activity. The study, coordinated by Sian Beilock and Ian Lyons from the University of Chicago, and financed with the aid of the National Science Foundation, had a group of university students solve spelling and math problems. The type of each exercise was signaled with a symbol and the students’ brain activity was monitored with functional magnetic resonance. The study found that self-professed math anxiety sufferers had significantly lower frontal and parietal lobe activity, compared to non-anxious students. By increasing activity levels in these areas of the brain, the researchers were able to also improve math anxiety levels.

What does this mean, in simple English? It means that you could choose to sign up for online college math courses, for instance. While the scientists didn’t find additional math training to improve anxiety levels, they did learn that this type of anxiety can be surmounted with the aid of the conviction that you can solve the given task. One way to do this is to simply breathe in deeply before you start your math coursework, or your math test. Then choose to actively focus on getting the job done, not on the anxiety itself. Like many other similar emotions, math anxiety is a kind of self-fulfilling prophecy. Additional online training might not benefit anxiety sufferers directly, but it could positively influence their self-confidence levels, when it comes to solving math problems.

When you choose to focus on getting the work done, rather than on the anxiety, your brain effectively increases its frontal and parietal lobes. This reaction, the scientists observed, then propagates itself to the rest of the brain, especially in subcortical structures, which regulate motivation, as well as risk-reward behaviors. Simply put, the way to get over math anxiety is to effectively lead your brain to believe that it can totally handle the job and solve those exercises.

Humans might be born with an understanding of math

To help you with that motivational feat, consider another study, recently completed by a team of scientists from Paris’s Descartes University. The results of the research seem to indicate that at least some mathematical concepts might be hard-coded into our brains – we are literally born with some knowledge of math. If this assumption sounds ridiculous, consider the following experiment: the French researchers traveled to the Amazon, where they observed the indigenous population of the Mundurucu tripe. The Mundurucu live in complete isolation from any other human population and have no formal education system. However, as per the researchers’ observations, they understand and operate with concepts of Euclidean planar geometry. They are also capable of comprehending abstract concepts, with no real-world equivalents, such as infinite planes and angles. 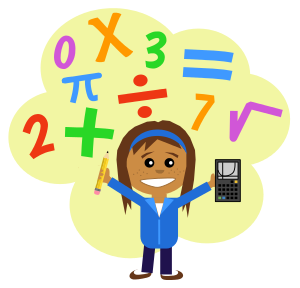 How is this possible? The language of the Mundurucu tribe doesn’t even have words for geometric concepts like angles, planes, or other geometric concepts (triangles, points, lines, etc.). In spite of this, though, members of the tribe who were asked to apply these concepts to a sphere actually outperformed their peers in the United States and France. So, then, what’s the explanation? According to Veronique Izard, a psychologist with the Paris Descartes University, “this means Euclidean geometry is probably universal to all human beings. We find people grasping concepts that go beyond the perceivable”.

Further tests, on children aged seven and older, seem to indicate that this hypothesis is correct. The children were administered geometry tests and their results matched those of U.S. and French children with formal training in education. To boot, they outperformed American and French children aged 5 to 6, who hadn’t received training in geometry. The researchers say that this innate process of understanding geometry and operating with its concepts is similar with that of puberty. Though our bodies undergo changes from the very moment of birth, many of these changes are not fully apparent until teenage.