The University of California—Los Angeles doesn’t need much of an introduction, as far as top colleges in the U.S. go. It was founded nearly a century ago, in 1919, enrolls nearly 28,000 students and its current in-state tuition stands at $12,696. According to the yearly U.S. News ranking of American colleges, it’s number 23 in the country, noted mostly for its School of
Theater, Film & Television, as well as for its School of Dentistry and the Ronald Reagan UCLA Medical Center (which is actually one of the best hospitals in the United States). Needless to say, it’s location, credentials, and academic standings make it a popular choice with prospective students year in and year out. But what about its online training offering? 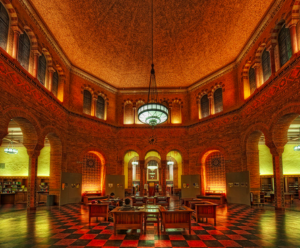 Though UCLA offers a wide range of online programs, both for undergraduates, as well as for graduates, only one program met the U.S. News requirement of being 100 per cent online by federal standards. The UCLA Online Graduate Engineering Program is actually the second best in the U.S. in its field. During the course of the 2013-2014 academic year 291 students were enrolled, with 98 per cent of them being employed. The program has a rolling deadline for admissions and ranks very highly in terms of credentials, student engagement and admissions selectivity. In other words, it’s a good school, albeit one that’s comparatively difficult to get in.

But there’s far more to UCLA online courses than the prestigious UCLA (Samueli) engineering program. In fact, a lot of the school’s departments provide both online and hybrid courses, both at introductory, as well as at advanced levels. As a UCLA student, you also have access to the school’s Cross-Campus Enrollment System, which allows you to attend courses designed and
taught by faculty from other campuses of the University of California. And the online courses also earn you credit, for GE, pre-major, or even for your major.

Perhaps the most exciting and flexible online program offered by UCLA is that of summer courses. They’re available for basically everyone, but are especially recommended for people who want to study at home, or who can’t take time away from work over the summer. It’s important to note that these courses also carry credit value. On your college transcript, there will be no mention of whether a course was taken online or on campus, so there’s no need to worry about these courses being considered second rate. The course list for the summer of 2014 term includes art, science and technology, Shakespeare’s plays, filmmaking, a course on
Jane Austen and her peers, system architecture, channel and source coding, digital cinema, and plenty more.

Typically, you can enroll in summer courses at UCLA beginning with February 1, if you’re already a matriculated UCLA student. However, the experience is available for people from all around the U.S. and the world, without having to go all the way to California to see what this school has to offer. Just make sure that you’re opting for fully online courses when you sign up, because some are hybrid and do require some on campus presence. After registering for the classes of your choice, you will be able to enroll by March 1. There’s no registration fee for prospective students who only sign up for online courses. Likewise, there is no campus fee for students enrolled in online classes only.

There’s a $150 registration fee from students who aren’t already enrolled with UCLA; the fee stands at $400 for international students. This amount is non-refundable and must be paid in order to have your registration processed. If you’re a UCLA student from the College of Letters and Science or a non-UCLA student, you can take up to 18 course units, via the MyUCLA portal.
UCLA students from other schools can choose up to 16 course units, while high-school students interested in taking college courses can only sign on for two courses, totaling no more than 10 units. It’s worth bearing in mind that, while these courses don’t guarantee UCLA admission, they certainly make a prospective student’s application that much more competitive, once the
time for college applications comes around.

The process of enrolling is actually very simple, since, during the summer semester, UCLA applies an open enrollment policy. This means there will be no need for transcript or SAT score submissions. International students, however, will need to prove that they can proficiently use the English language – save for those who only want to attend UCLA’s summer ESL course. And, of course, the best part to attending the school’s summer online courses is that you can broaden your horizons and/or amass school credit irrespective of whether you’re going away on vacation, taking a summer job, or simply want to study at home.